Aroniaberries are the King of Antioxidants 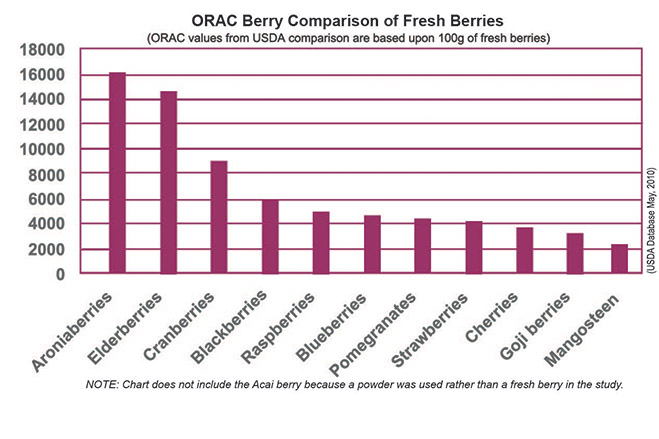 I’ve been doing quite a bit of research on the Aronia Berry, including how it stacks up against other popular berries and where it’s grown. It’s been an interesting and sometimes enlightening study particularly when it comes to the USDA ORAC scale. ORAC is an acronym for Oxygen Radical Absorbance Capacity. The scale quantifies the TAC or total antioxidant capacity of a food by mixing the food with certain molecules that generate free radical activity and other molecules that are vulnerable to oxidation.

Because of its high ORAC levels, there are various studies being performed on the Aronia Berry regarding its potential for health benefits. Some of the studies have already shown that the Aronia Berry has very little side effects from long term use other than a mild case of diarrhea if overused. The bulk of other berries, such as Mangosteen, Goji, Pomegranate, Cranberry and Blueberries have been shown to interact dubiously with certain medications, particularly blood thinners, and sometimes with blood pressure medications.

I’ve also discovered through my research that the Aronia Berry is originally indigenous to the North American continent and the Eastern European block countries. I was surprised to learn that the largest producer of Aronia Berries in the world is Poland, which accounts for over 80% of the Aronia Berry production. However, Aronia Berry farms are becoming much more prevalent in the northern plains of North America with the state of Iowa leading the production of Aronia in the United Sates at this time. The farms and the production of Aronia Berries are likely to grow as more knowledge is gained and continuing studies confirm the potential health benefits of the chokeberry.

Which brings up another question that I’ve been asked frequently; why is the Aronia Berry sometimes called the chokeberry? That information wasn’t readily available in my research, but I assume it has something to do with the astringent taste and fibrous nature of the Aronia Berry.

Whatever the case, the research continues to indicate that the Aronia Berry is one of the few natural foods with an exceptionally high concentration of antioxidants and flavonoids. Eating the berries in frozen or concentrated form in conjunction with a healthy diet and exercise can certainly assist in maintaining an optimum physical lifestyle and give a boost toward better health.

For more information on the ORAC level of the various berries and how they stack up to the Aronia Berry, check out the ORAC chart. In the meantime, enhance your healthy diet and lifestyle routine with the “power of purple”.
SaveSaveSaveSave

Stay Connected
|Contact Us  | |Where to Buy  | |Contests  | |COVID-19  | |Policies & Procedures  | |Shipping  | |Site Map  |
The statements made on this Web site have not been evaluated by the FDA. Nor have the products, which are not intended to diagnose, treat, cure, or prevent any disease.
Information accessible on this Site is for information only and is not intended to be a substitute for professional medical advice.
© 2010- Mae's Health and Wellness, LLC